Welcome to a special issue of the New Eastern Europe newsletter following the BASEES Conference 2012.

The British Association for Slavonic and Eastern European Studies (BASEES) held their 2012 annual conference at Fitzwilliam College, Cambridge, between March 30th and April 2nd. New Eastern Europe attended the conference, both as a delegate and an exhibitor, where we managed to meet and chat to many of the delegates.

The keynote speaker at BASEES 2012 was Ivan Krastev. We managed to catch up with him after his lecture, and this is a short extract from the interview he gave us about the future of European integration:

“I believe that the European Union is now going to have to take in a much more long-termed strategy [for integration]. And of course, there will be trade-offs between economic interests and political interests – but at the end of the day the focus will now be on institutional change, above the classical integration policies. And the EU should not allow any of the tensions to basically exploit Russia-EU tensions in Russia’s interests.”

You can read the full interview on our website: www.neweasterneurope.eu/node/291

The Future of Energy Security in Europe

We also had the opportunity to hold an extremely interesting discussion with Tomas Maltby (University of Manchester), Andrew Judge (University of Strathclyde), and Jack Sharples (University of Glasgow) about the Future of Energy Security in Europe. Here is an extract from the discussion:

New Eastern Europe: How would you sum up EU/Russia energy relations in 2012?

Tomas Maltby: I think 2012 is going to be a huge year for EU/Russia energy relations as there are so many hands on the table just about to be sorted out: the situation with the Nabucco pipeline of the Southern Gas Corridor might be resolved, Russia is probably going to make progress on the South Stream pipeline this year, the Nord Stream pipeline will also be coming online pretty soon, shale gas exploration will continue, and discussions regarding nuclear energy and renewables as a future will also continue.

You can read the complete discussion on our website: www.neweasterneurope.eu/node/271

Managing Editor, Adam Reichardt, attended many of the sessions and has written a review sharing his highlights of the conference. Here is an extract from his review:

“What is very unique about the BASEES conference is that it not only focuses on political or current events of the region but encompasses a wide array of fields: from politics, economics, history, literature, culture, sociology, gender studies, film studies, linguistics, and much more. In one conference it is possible to learn about the construction of Czech national mythology through television, the Polish migration to the United Kingdom, the intricacies of Belarusian translation, development of Russian musical institutions after 1917, and the economic impact of the Global financial crisis in Ukraine. The only downside to this event was that there were so many interesting sessions happening at the same time that it was impossible to attend them all, and many gems were surely missed.”

You can read the full review on our website: https://www.neweasterneurope.eu/node/290

Finally, we wanted to share comments given to us about BASEES 2012 by some of the delegates:

Ross Gill, PhD candidate at Birkbeck College, London: This was my first time at BASEES, and an excellent opportunity to see a wide range of current research, not just in my own field, but across a broad scope of disciplines – and fascinating to see the connections between such diverse interests.

Jack Sharples, is a PhD candidate at the University of Glasgow: I think the breadth and interdisciplinary nature of the BASEES Conference is what makes it interesting, because it is a chance for academics to sample other areas of research we would not normally touch.

Andrew Judge, a PhD candidate at the University of Strathclyde: Just looking down the list of topics on offer at the BASEES Conference it's great coming out of your own narrow disciplinary specialism, and actually just coming to see the range of social, political and cultural issues that are being discussed is fantastic. It is really interesting.

Tomas Maltby, a PhD candidate at the University of Manchester: I think it's the interdisciplinary nature of the BASEES Conference which makes it so interesting, and when you look at the panellists, you have a mixture of sociology, politics, history and literature. I don't think there are too many other conferences that have this real mix of various inputs from different academic fields. 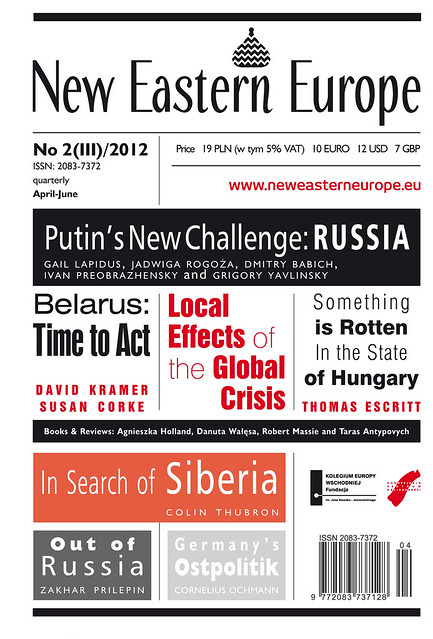 The new April/June 2012 issue of New Eastern Europe is now in the shops, as well as available to buy from our online shop.

The issue opens with a series of analysis examining the situation in Russia and the new challenges that await Vladimir Putin as he returns to the Presidency. American expert Gail Lapidus, Polish analyst Jadwiga Rogoża, and Russian political analyst Ivan Preobrazhensky all provide key insight on what they see as the changes taking place in Russia and what is in store for its immediate future.

The issue also features an exclusive text by David Kramer and Susan Corke of Freedom House. Writing for New Eastern Europe, they make the case for further action with Belarus, warning that if the West does not act soon, it will be too late.

Lastly, this issue provides a special feature providing a holistic view of the economic situation in the region as a result of the economic crisis. The feature is opened by a text from World Bank Economists, Benu Bidani, Mame Fatou Diagne, and Salman Zaidi. All these along with texts by Dmitry Babich, Gail Lapidus, Zakhar Prilepin, Cornelius Ochmann, Katarzyna Kwiatowska and Ziemowit Szczerek, and interviews with Colin Thubron and Grigory Yavlinksy, as well as reviews of the latest books and films on or from the region are found in this issue of New Eastern Europe.

We hope that all the BASEES delegates will consider subscribing to New Eastern Europe. As a non-profit journal, we count on the support of readers. A one-year subscription costs 32 euros (including priority shipping).

Subscriptions, single copies and back issues can now be bought at our online shop. You can pay by credit card (Visa and Mastercard) or bank transfer through our new, secure online payment system. For more information please visit (www.east24.eu/en_US/index) or contact subscription@new.org.pl.

We hope to see all of you next year!