Welcome to the June 2012 newsletter!

The summer 2012 issue of New Eastern Europe takes a closer look at the political and cultural developments taking place in the region. The theme of this issue, “New Europe Old Problems”, highlights the fact that even though we are in the 21st century, many of the problems these countries faced over 20 years ago before the collapse of the Soviet Union are still present today.

BBC investigative journalist, John Sweeney, reports on his recent trip to eastern Ukraine writing that in Kharkiv, “People seem to look on the Soviet ways with respect and affection, which is why they haven’t changed the street names that much and the Lenin statue still haunts the city.” Polish expert, Grzegorz Gromadzki analyses Russia’s power system under Putin in comparison to previous regimes, while British researcher and writer, Kelly Hignett, provides a picture of the Cold War style diplomatic-espionage games that are taking place between the United Kingdom and Russia today. And Yegor Vasylyev puts Viktor Yanukovych under the microscope with his analysis of the Ukrainian president. 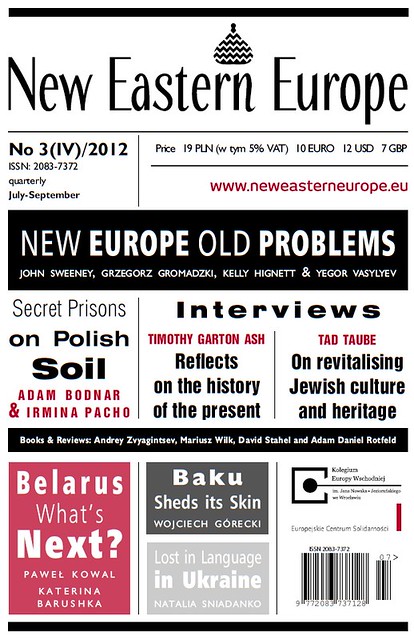 Belarusian journalist, Katerina Barushka, tells the story of the 2011 Minsk metro attack, while Paweł Kowal, a member of the European Parliament, advocates for a new approach toward Belarus.

In addition, Adam Bodnar and Irmina Pacho from the Helsinki Foundation for Human Rights in Warsaw provide their perspective on Poland’s participation with the American CIA in the imprisonment of terror suspects on Polish soil. An interview with Timothy Garton Ash convinces us “that we cannot talk about a new Iron Curtain. The lines are both more fluid and more complex,” while Tad Taube, of the Taube Foundation for Jewish Life and Culture advocates for Poland to rediscover its Jewish heritage in 21st century Eastern Europe.

Cultural texts look at the life of Bruno Schulz, feminism in Poland, and cross-border arts programmes; while reports from Moscow and Baku wrap up the issue along with reviews of the latest books and films from or about the region.

Look out for the new issue in the shops from the beginning of July. Or contact us directly to order a subscription, individual copies and back issues.

The best way to support New Eastern Europe is by taking out a subscription. Subscriptions, single copies and back issues can now be bought at our online shop. You can pay by credit card (Visa and Mastercard) or bank transfer through our new, secure online payment system. A one-year subscription costs 32 euros (including priority shipping). For more information please visit (www.east24.eu/en_US/index) or contact subscription@new.org.pl. For institutions wishing to be invoiced for payment please follow this link to download our subscription form. As a non-profit journal, all proceeds made on the sale of the magazine are used for the sole purposes of ensuring the highest quality to our readers and maintaining free online content.