Putting sculptures of Lenin and Pinocchio in a wastewater treatment plant seems a bit eccentric, but a new exhibition in Prague by Hungarian artist Sam Havadtoy is an ingenious mix of whimsy and industry.

“The idea was very site specific,” Mr. Havadtoy said. “Look at the three Lenin’s, stuck between sewer pipes and with chains hanging around; it’s perfect.”

Prague’s Stará Čistírna’s museum is indeed a former wastewater treatment plant; located in a protected industrial building from the early 1900s. Visitors can wander the dark rooms and winding passageways, checking out the steam engines and other original machinery. Now this cavernous building is considerably brightened by Mr. Havadtoy’s paintings and sculptures.

“When I came here, I decided to do the ducks,” he said. “Especially because it is an event for children.”

How a Hungarian artist came to have an exhibition in Prague is a roundabout tale. As Havadtoy tells it, a couple of years ago the executive director of the Sunbeam charity asked him to donate a piece of artwork for their fundraising auction. Sunbeam assists children with cancer. Havadtoy was sceptical, “No one knows me here, who will want to buy it?” So instead, he donated a John Lennon lithograph that he says fetched 8 – 10,000 euros. Sunbeam’s director, Pavel Boček, this year got the idea to have an exhibition of Mr. Havadtoy’s work to kick off the agency’s auction.

“Then, he tells me (Mr. Boček) people will know who you are!” Havadtoy added.

The exhibition, entitled Loneliness, is scattered throughout the museum.  In the building’s main room is a huge cheerful looking duck, the walls are lined with his college prints of mini-ducks. Downstairs, you can find 60 of these colourful creatures bobbing on pedestals, spotlighted and scattered around the mechanical works of the factory. Mr. Havadtoy’s original idea was to float the ducks in the pool of water that is here.

“I originally wanted the ducks in the water, and to have them lit, but there are blind fish in the water and the light would have killed them,” he said. “Like all great ideas, everything was planned out on paper, but things never turn out like you had planned. But whatever you end up doing is usually better than you had planned. It’s not saving the world – it’s art.” Mr. Havadtoy’s gigantic version of the duck was originally supposed to be placed on Wenceslas Square, but the city was afraid it would be destroyed. Now it lords over the main room, looking smug, but happy.

Mr. Havadtoy uses lace in all his work and the material gives his sculptures on display here a rich texture that appears even in the prints. After creating the mini ducks, he photographed and layered them, printing them so they look like a collage. This texture is intense in the prints as well, making each duck come alive and subtly standout from its neighbour. 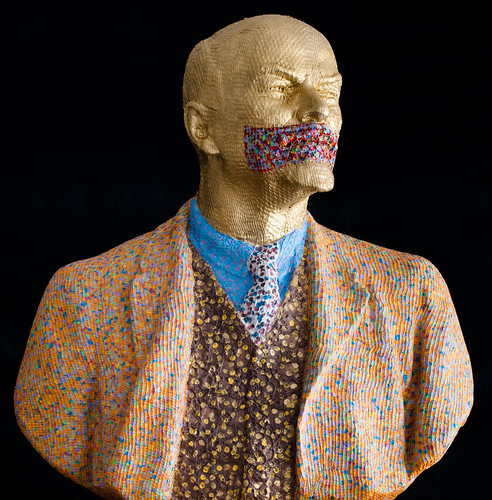 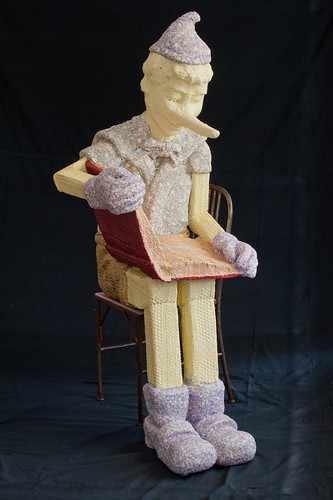 Mr. Havadtoy is an English born artist of Hungarian origin who lived and worked in the vibrant New York art scene of the 1970s and 80s. Connecting with a host of well-known names there like John Lennon, Andy Warhol, David Bowie, and Keith Haring; Mr. Havadtoy lived with Yoko Ono following her breakup with Lennon. His work reflects the pop-art from his time in New York, combined with the sensitivity of someone intimately familiar with eastern European life. Opening the Sam Havadtoy Gallery and Interior Design Studio in New York, Mr. Havadtoy was deeply involved in design, something he has put behind him a bit.

“I’m getting older, design is so interactive, very personal, but in the studio I lock myself in, put in my favourite music and I’m happy,” he said, adding that he can see evolvement in his work.

“I’ve also started to paint with dots, normally I cover my problems with paint, but with dots it’s like a mantra,” he said. “The ducks are lace, then paint, then dots and I see that my dots are no longer sad. In other works the dots are very sombre, but I have come out of whatever was in the past and I am in a very happy-go-lucky situation.”

For about 10 years now, Mr. Havadtoy has been starting his work by writing his problems, complaints or other concerns on the canvas, painting over it, then covering it with lace and starting his piece. The method comes from hypnotherapy sessions Mr. Havadtoy participated in following his breakup with Yoko Ono. The sessions were recorded, and afterward he was encouraged to write out, by hand, what he said while under hypnosis. 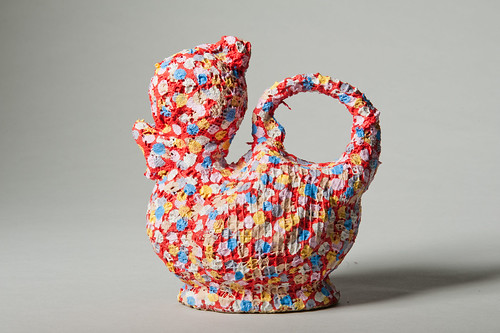 “The story itself is for me a way to work through my grips, self-pity, but I’m having so much fun with it, processing certain angst about oneself,” he said. “I’ve been doing this more than 10 years and I’ll continue, sometimes it’s funny stuff, I’m not always complaining.”

There are two other exhibitions of Mr. Havadtoy’s work this year, one in Milan and one in Romania. The exhibition in Milan is in a sleek, gallery space, while in Romania his work will be displayed in a Transylvanian castle, complete with mouldings and gilding. A Pinocchio will appear in both locations, while the three Lenin’s (hear no evil, see no evil, speak no evil) will only be in Milan.

“These are totally different spaces to fill, so the designer in me is very happy, I’m still decorating,” he said.

As for his Prague exhibition, Mr. Havadtoy deems it a success.

“For me, I achieved what I wanted to do as a dialogue with the space; it’s nice in the space and I’m happy.”

Jacy Meyer is a freelance journalist living in Prague. She has contributed to a number of international and local publications, including The New York Times, International Herald Tribune, Christian Science Monitor, and many others.