A Christmas Tree Decorated with Blood

On December 1st 2013, there were as many as 700,000 in the downtown Kyiv. They came to say that they were outraged and shocked by the brutal crackdown of the peaceful protest at the Independence square the day before, November 30th.

People came to the National Council at Maidan Nezalezhnosti (Independence Square) in order to understand what to do next. The central streets were completely filled with protesters.

“This is not a protest, not just an action anymore. This is revolution” said Yuri Lutsenko, the former Minister of Internal Affairs, and now the leader of the movement called “Third Ukrainian Republic” While announcing the action plan by opposition leaders, Arseniy Yatsenyuk, Vitali Klitschko and Oleh Tyahnybok also called on people to stay calm and not to succumb to provocations. 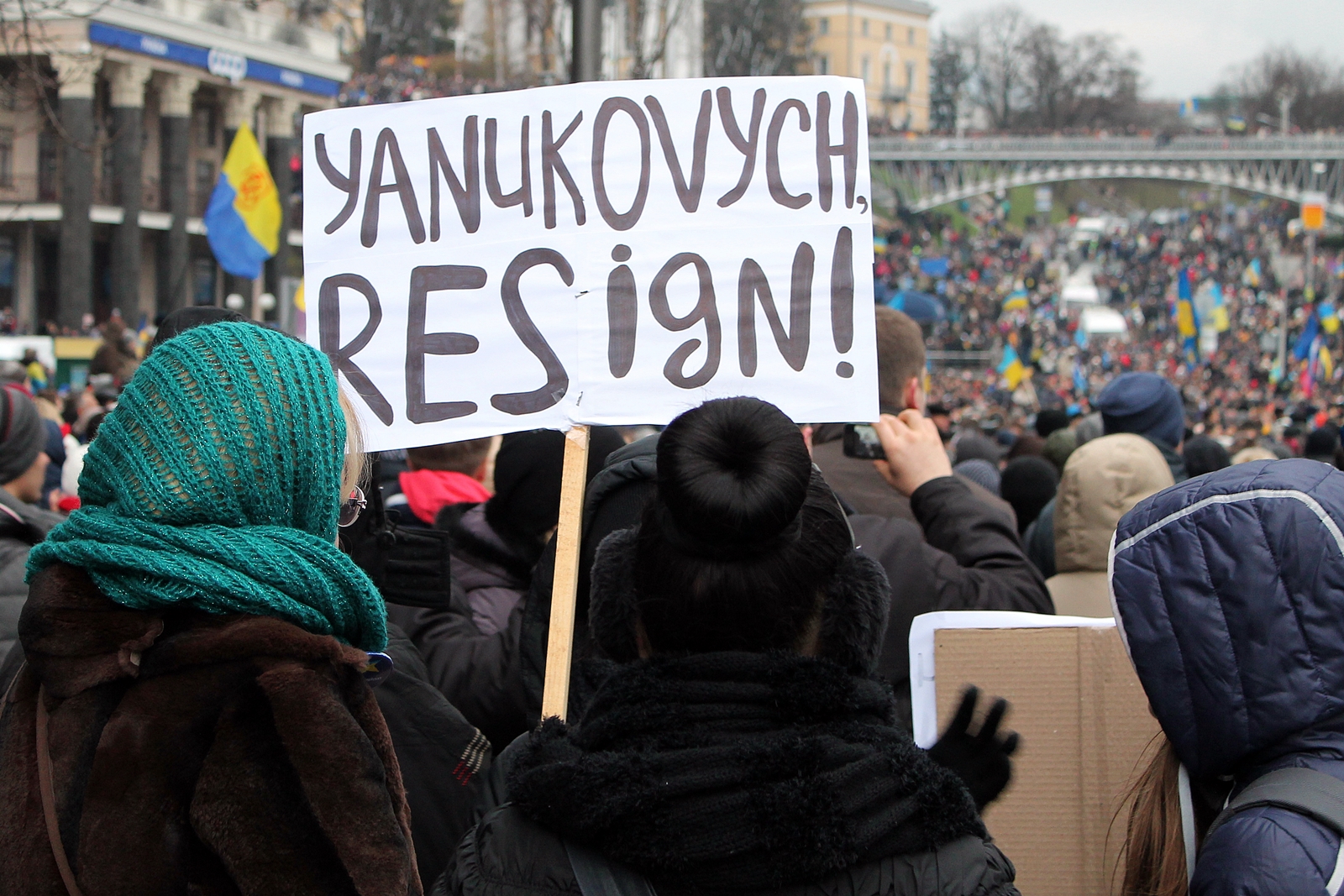 Opposition leaders formed a “National Salvation Committee” and announced a nationwide strike in the country. Tyahnybok said that they will be setting up tents on Independence Square in Kyiv, while in every region of the country they will be creating a local headquarters for the National Salvation Committee to coordinate the protests. The opposition also urged people not to go outside the square, not yield to provocations and not to storm government buildings.

Despite, this radically youths attempted to break through a special unit of Berkut forces and capture the Presidential Administration on Bankova Street using a tractor. But the peaceful protesters stopped them and called the Berkut to keep calm. Nevertheless within some hours, about a hundred radicals attempted again to break into the administration building. This time they were beaten by security forces. During the day many youths in masks also smashed windows and forced themselves into city administration buildings.

The opposition leaders have said that these most of these fights with security forces are provoked by the government. These young men armed with bats, knives and tear gas cans, according to Arseniy Yatsenyuk, are trying to provoke peaceful the protesters to fight. If the riots continue, the government will have legitimate reason to introduce a state of emergency.

“We know that the President wants to convene the National Security and Defense Council of Ukraine to call a state of emergency,” said Yatseniuk at a press briefing on Sunday. In this case, the government could use water cannons in order to disperse peaceful protests. Opposition leaders have said that they have no relation to these provocations near the Presidential Administration in Kyiv. “The personal responsibility for what is going on at the Presidential Administration should lie on Viktor Yanukovych and the NSDC Secretary Andriy Klyuev,” said Yatsenyuk. Yatsenyuk also urged the president not to introduce a state of emergency, but rather to protect the public safety and allow the possibility for peaceful protest. 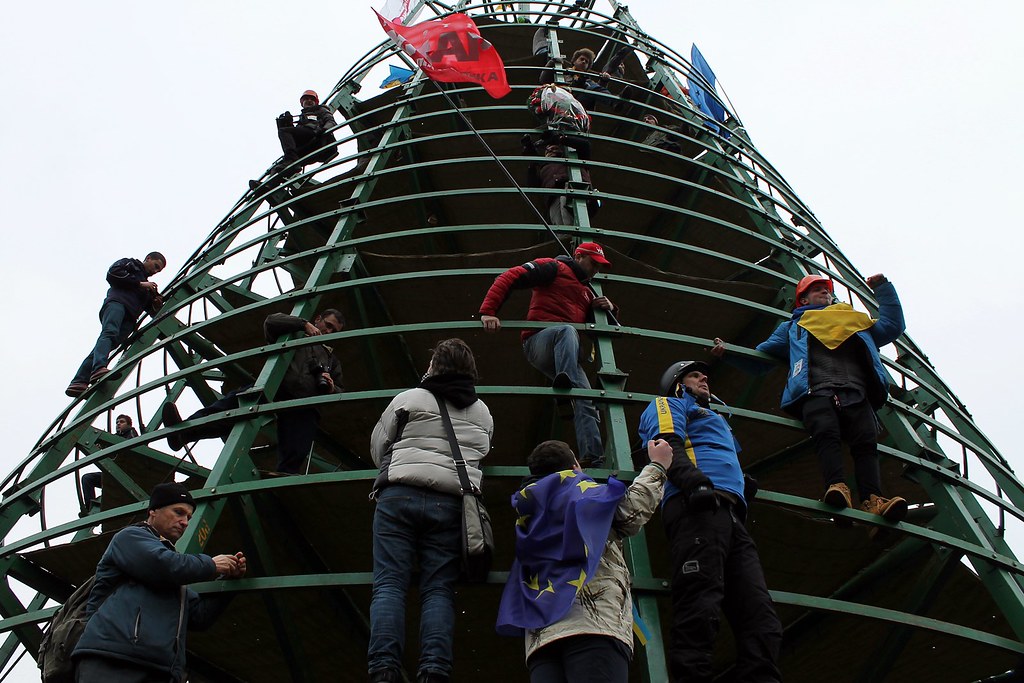 The night of November 30th in Ukraine has already been called “Black Saturday”. At four in the morning, when only students, young boys and girls, were staying at the square overnight, hundreds of special unit soldiers dispersed them with cruelty. Berkut soldiers were catching and beating those who were trying to escape or who fell down. As the Kyiv police later explained, this area was “cleaned” out to set up the Christmas tree and the ice-skating rink. After this night massacre, 36 people sought medical help, seven of them were hospitalised, and about 30 people were detained by the police.

While running from the Berkut people found the refuge in the St. Michael’s cathedral and barricaded there, not letting police officers inside. Meanwhile at the Maidan square there is already a frame for the ill-fated tree, which Yuriy Lutsenko called “Christmas tree decorated with blood”.

On Sunday, protesters have decorated this frame with flags of EU countries.

All photos by Wojciech Koźmic 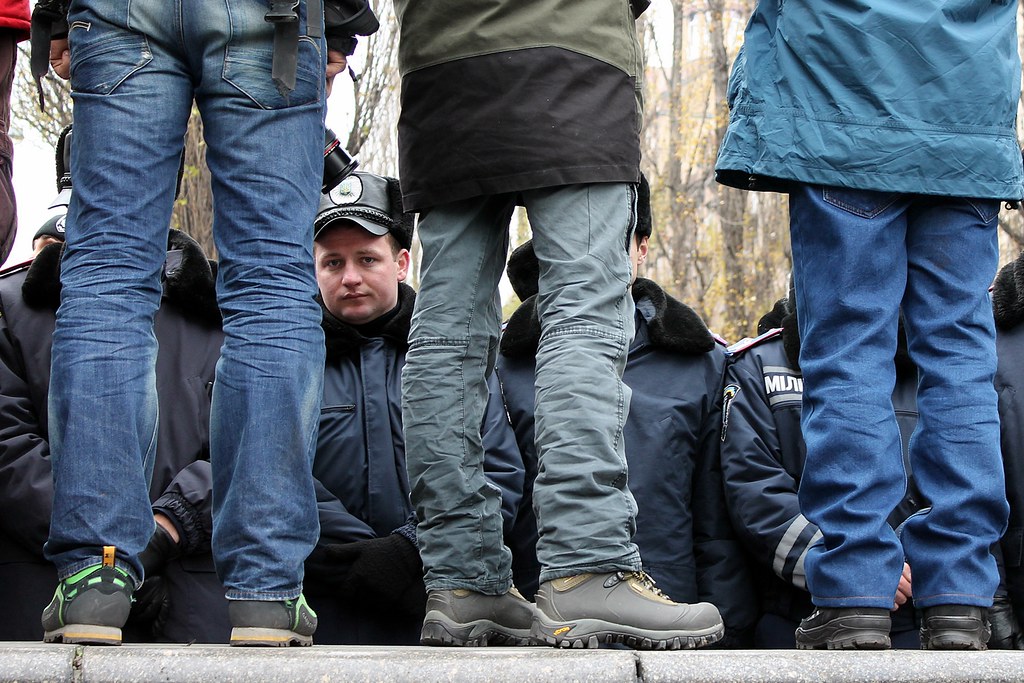 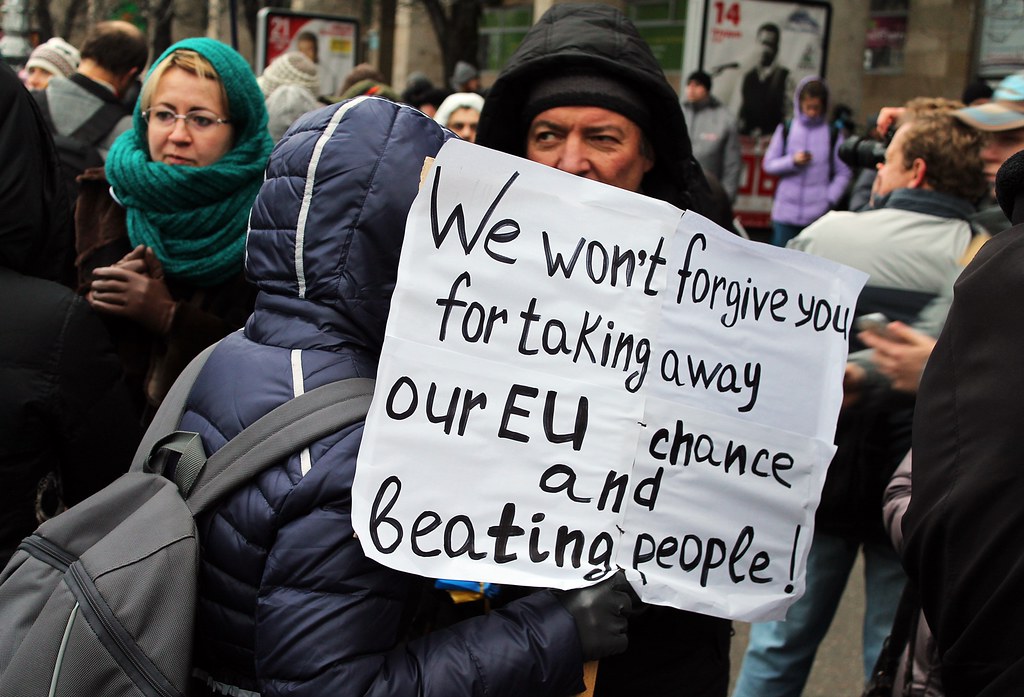